Books by Andrei Maleav-Babel about Vakhtangov:

The Vahktangov Sourcebook is a rich and extensive source of information and analysis of the central principles of Vakhtangov’s  work and compiles new translations of his key writings on the art of theatre, making it the primary source of first hand material on this master of theatre in the English speaking world. For more information click on this link or click on the thumbnail.     Ranging from Moscow to Israel, from Fantastic Realism to Vakhtangov’s futuristic projection, the theatre of the ‘Eternal Mask’,


Yevgeny Vakhtangov: A Critical Portrait: For more information click on this link or click on the thumbnail.

Posted by Michael Craig - Copernicus Films at 04:21 No comments: 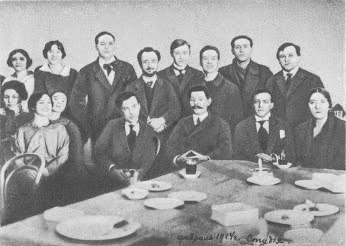 Put together edit for Vakhtangov's production of Ibsen's Rosmersholm for the film Vakhtangov & the Russian Theatre.http://www.vakhtnagov.copernicusfilms.com

Its a short section but an important part of Vakhtangov's development. One thing which one needs to be careful of is that Vakhtangov's development as an artist is often seen in terms of a linear trajectory which moves logically from one production to another culminating in Turandot before his death. However the fact that Vakhtangov was approaching death influenced the choice of productions he undertook and how they were presented. As Vladislav Ivanov explained to me the fact that if Vakhtangov had not been in great pain and close to death it is unlikely that he would have chosen to stage Erik 14th Dybukk and Turandot. The themes of life and death run through these plays and in some sense defines their inner dynamic.

Steady progress with the first draft edit. The next stage is the Miracle of Saint Anthony section. ﻿

Posted by Michael Craig - Copernicus Films at 12:59 No comments: