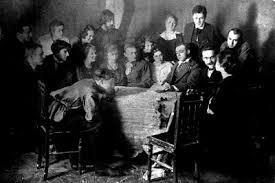 Moving forward with the edit of Vakhtangov and the Russian Theatre. Concentrating on The two productions Vakhtangov put on of "The Miracle  of  St Anthony" by Maeterlinck the Belgiun playwright. A pivotal figure in theatrical history and very much part of Vakhtangov's theatrical outlook and the theatrical currents of Russia of Vakhtangov's time - that is revealing the inner world of human consciousness or the soul.While Vakhtangov saw the power of Maeterlinck's art he was developing his own unique human outlook and saw the actors task differently from Maeterlinck.Maeterlinck was a student of Arthur Schopenhaue. He believed man was powerless against the forces of fate. Therefore he maintained that any actor, due to the hindrance of physical mannerisms and expressions, would not be able to  portray the symbolic figures of his plays. For Maeterlinck marionettes were a preffered  alternative. Guided by strings operated by a puppeteer, Maeterlinck considered marionettes an excellent representation of fate's complete control over man. He wrote Interior, The Death of Tintagiles, and Alladine and Palomides for marionette theatre.From this, he developed his concept of the "static drama." He felt that it was the artist's responsibility to create something that did not express human emotions but rather the external forces that compel people. Maeterlinck once wrote that "the stage is a place where works of art are extinguished. [...] Poems die when living people get into them."He explained his ideas on the static drama in his essay "The Tragic in Daily Life" (1896), which appeared in The Treasure of the Humble. The actors were to speak and move as if pushed and pulled by an external force, fate as puppeteer. They were not to allow the stress of their inner emotions to compel their movements. Maeterlinck would often continue to refer to his cast of characters as "marionettes."Maeterlinck's idea of modern tragedy does away with  intrigue and the brilliance of external action of traditional drama in favour of a dramatisation of different aspects of life. He outlines his view thus:“ Othello is admirably jealous. But is it not perhaps an ancient error to imagine that it is at the moments when this passion, or others of equal violence, possesses us, that we live our truest lives? I have grown to believe that an old man, seated in his armchair, waiting patiently, with his lamp beside him; giving unconscious ear to all the eternal laws that reign about his house, interpreting, without comprehending, the silence of doors and windows and the quivering voice of the light, submitting with bent head to the presence of his soul and his destiny—an old man, who conceives not that all the powers of this world, like so many heedful servants, are mingling and keeping vigil in his room, who suspects not that the very sun itself is supporting in space the little table against which he leans, or that every star in heaven and every fibre of the soul are directly concerned in the movement of an eyelid that closes, or a thought that springs to birth—I have grown to believe that he, motionless as he is, does yet live in reality a deeper, more human, and more universal life than the lover who strangles his mistress, the captain who conquers in battle, or "the husband who avenges his honor."Maeterlinck postulates several classical Athenian tragedies—which, he argues, are almost motionless and diminish psychological action to pursue an interest in "the individual, face to face with the universe"—as precedents for his conception of static drama; these include most of the works of Aeschylus and Sophocles' Ajax, Antigone, Oedipus at Colonus, and Philoctetes.  With these plays, he claims:“ It is no longer a violent, exceptional moment of life that passes before our eyes—it is life itself. Thousands and thousands of laws there are, mightier and more venerable than those of passion; but these laws are silent, and discreet, and slow-moving; and hence it is only in the twilight that they can be seen and heard, in the meditation that comes to us at the tranquil moments of lifeVakhtangov might take a different view and did indeed take a different path, by asserting the striving of human freedom in the face of external forces however unsuccessful that striving might be, it is the act itself, the assertion which can transform consciousness into something which is no longer a passive dead receptacle, into a living acting and ecstatic force. In fact such artistic striving was a defining character of Vakhtangov's struggle with life and death in his final years. For Vakhtangov it is the transformative quality of art - its ecstatic core and the art of the theatre which most expresses humanity. Human beings for Vakhtangov were not marionettes and neither were actors. The human soul is not a static entity it is demonstrably active and transcendental. ﻿
Posted by Michael Craig - Copernicus Films at 06:36 No comments:

Put together edit for Vakhtangov's production of Ibsen's Rosmersholm for the film Vakhtangov & the Russian Theatre.http://www.vakhtnagov.copernicusfilms.com  Its a short section but an important part of Vakhtangov's development. One thing which one needs to be careful of is that Vakhtangov's development as an artist is often seen in terms of a linear trajectory which moves logically from one production to another culminating in Turandot before his death. However the fact that Vakhtangov was approaching death influenced the choice of productions he undertook and how they were presented. As Vladislav Ivanov explained to me the fact that if Vakhtangov had not been in great pain and close to death it is unlikely that he would have chosen to stage Erik 14th Dybukk and Turandot. The themes of life and death run through these plays and in some sense defines their inner dynamic.Steady progress with the first draft edit. The next stage is the Miracle of Saint Anthony section. ﻿
Posted by Michael Craig - Copernicus Films at 06:33 No comments:

Another day of editing on Vakhtangov and the Russian Theatre - http://www.vakhtangov.copernicusfilms.comWorking through the material section by section in order to establish a first draft. Tomorrow will concentrate on the impact of Gordon Craig and Stanislavsky's production of Hamlet. This was a ground breaking production using Gordon Craig's theatre design innovations. Also Craig conceived of the production as a mono drama. That is, all the main characters in Shakespeare's play are products of Hamlet's conciousness and are not real. Here was a new kind of subjectivity and certainly a long way from Stanislavsky's idea of subjectity or the autonomy of individual characters in a  play. This production with Craig's innovationsin 1911 made a lasting  impression on Stanislavsky's students including Vakhtangov who put on productions of Erik 14th and Turandot.﻿
Posted by Michael Craig - Copernicus Films at 04:39 No comments:

Vladislav Ivanov http://ow.ly/gjbkC  who has published several books about Vakhtangov in Russia gave me a copy of his book about theatre Habidahttp://en.wikipedia.org/wiki/Habima_Theatre  for this section of the film. On the one hand it requires a certain amount of rewriting of this section of the script due to new insights and angles on this part of the film. This is a normal process whereby the editing and script get updated in parallel with each other.When you think you have everything locked down ready for post production there is always something new to add in or adjust.
Excellent book in Russian. I'm not sure if there is an English translation but if there is worth reading.﻿
Posted by Michael Craig - Copernicus Films at 04:33 No comments:

Continuing with edit - mostly preliminary preparation for the major post production push after the holiday. This will include full edit plus soundtrack and voice over recording. Yesterday was at the Vakhtangov Theatre where the 2nd part of the Museum is housed. filmed a few items which will be included in the film.﻿
Posted by Michael Craig - Copernicus Films at 04:30 No comments:


A sense of real movement in the script of Vakhtangov and the Russian theatre as I move towards the full post production period. After several discussions with Vladislav Ivanov I am starting to see a deeper layer to the film which has not occurred to me before and that revolves around the death of Vakhtangov and its significance. In the years 1920-1922 Vakhtangov was in immense pain and was aware that he was dying from an almost incurable disease and yet he carried on his creative and artistic life to  an almost unbearable pitch and tempo, beyond his own human capabilities. Vakhtangov didn't try and draw out the end but rather with  ties of life loosening, he strove forwards to the end, practically hastening it with his artistic effort and outpouring.

This almost Shakespearean tragic element to his life can not be underestimated and is a driving force in any account of his life without which his artistic achievements can hardly be understood.﻿

Add a comment...
Posted by Michael Craig - Copernicus Films at 02:50 No comments:


Posted by Michael Craig - Copernicus Films at 02:44 No comments: